A native of Nashville, TN, Mr. Shmerling began his career 45+ years ago as a Certified Public Accountant (now Inactive) with the Nashville office of Ernst & Young, formerly Ernst & Ernst CPAs. Following 17 years in public accounting, he founded or co-founded eleven businesses, four of which were ultimately sold to publicly traded companies. Following the sale of Background America, Inc. to Kroll Inc in 1998, he joined Kroll eventually serving as a member of the Board, EVP, Chief Operating officer of Kroll Inc and subsequently a Senior Advisor to Marsh Inc., following the sale of Kroll to Marsh. He currently serves as the Chairman of private equity firm Clearbrook Holdings Corp, formerly known as XMi Holdings, Inc. In addition to Clearbrook Holdings, he also serves as Chairman for several other local companies including RLCL Acquisition, LLC, dba Gray Line of Tennessee, Maynard Select, LLC and Choice Food Group, Inc.

In 2007, he was awarded both the Tennessee Society of CPA’s and the American Institute of CPA’s Public Service award. In 2009, he received Community Nashville’s Human Relations Award. He has received numerous Nashville Business Journal Future 50 as well as Inc 5000 Awards for companies in which he was involved. In addition to this recognition, he received the Tennessee Society of CPAs Outstanding CPA in Business and Industry Award in 1999.

Mr. Shmerling currently serves as Founder and Board Chair of Abe’s Garden, Inc., a 501c3 organization founded to honor his father’s legacy. Over the last 42 years, he has served on no less 25 non-profit boards including Fisk University, The Community Foundation, Renewal House, TPAC, the TPAC Foundation, United Way of Middle Tennessee and the Tennessee Society of CPAs. He currently serves on two public boards: Renasant Bank (RNST) and HealthStream, Inc. (HTSM).

Mr. Shmerling received a Bachelor of Accountancy degree from the University of Oklahoma
in 1977 and has been a licensed CPA (now inactive) for 32 years.

Tom Cigarran is a co-founder, former CEO and Chairman of Tennessee-based AmSurg Corporation, and Healthwaysa leading provider of comprehensive health support, care support
and wellness programs and services to health plans, employers, the Centers for Medicare and Medicaid Services (“CMS”) and hospitals.

Mr. Cigarran is among the ownership group and a former chairman of the Nashville based NHL hockey team, the Nashville Predators.Known for his commitment to education, Mr. Cigarran currently serves on the Alignment Nashville Operating Board, the Haiti Mission Education Committee, the Advisory Board of the Owen School Healthcare MBA Program, and as a member of the Boards of the Vanderbilt University Medical Center and Harpeth Hall School, He has served on the boards of the Nashville Health Care Council, Alive Hospice, and the Mental Health Association of Middle Tennessee.

Mr. Cigarran received a Bachelor of Science degree in Biology from Villanova University and a Master of Business Administration degree from the New York University Graduate School of Business.

Steve Geringer, a native of Tennessee, has a long career in the healthcare industry which includes AmSurg Corp, Addus HomeCare Corp, and many other healthcare companies a large number of which were started and or later based in Tennessee.

Mr. Geringer served as President and CEO of PCS Health Systems, Inc., a pharmaceutical benefits manager, following its acquisition of Clinical Pharmaceuticals, Inc., a Tennessee-based company of which he was co-founder, chairman and CEO. Mr. Geringer was credited with the rapid growth of PCS which 18 months after his appointment, was acquired by Eli Lilly & Co. for $4.1 billion and is now a unit of CVS Health.

Since 1997, Mr. Geringer has served on the Board of Amsurg Corporation (NASDAQ: AMSG). Mr. Geringer served as Chairman of the company from 2009 until 2016 when it merged with Envision; he remained a director until the purchase of the combined companies in 2018. 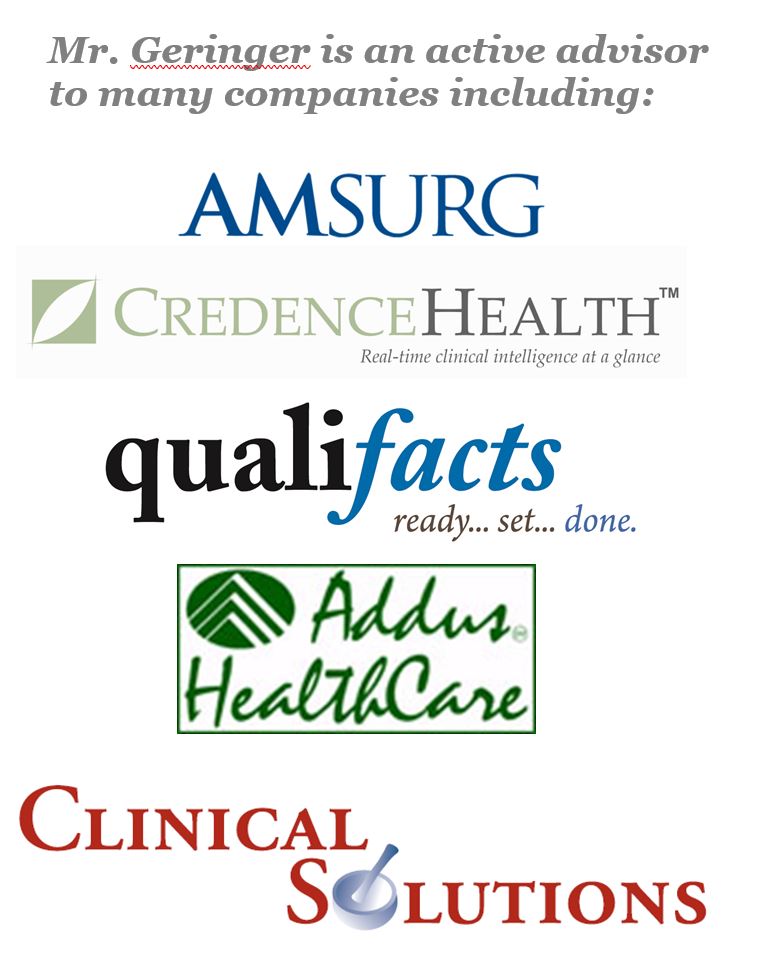 programs and a company of which Mr. Geringer was an investor and a director, was acquired by Providence Service Corporation (NASDAQ: PRSC), Mr. Geringer became a director and served the company until 2008.

Mr. Geringer joined the board of Addus HomeCare Corporation in 2009, and has served as its Chairman since 2016. Addus is one of the nation’s largest providers of in-home personal care services.

Mr. Geringer is an active mentor through his service as chairman of or director of other Tennessee-based companies: Qualifacts Systems, Inc., a software services company serving the behavioral health and human services markets until its sale in 2014; CredenceHealth, Inc., a real-time provider of clinical information for patient care decision-making in hospitals until its purchase by Xerox in 2016; and, Steve also serves on the board of ThriveAP and Fast Pace Urgent Care.

Mr. Geringer is an executive board member of Cressey & Company, and Vesey Street Capital Partners, both private equity firms.

Mr. Geringer received a B.S. in Economics from the University of Pennsylvania.

James C. Phillips is a skilled investment and management strategist who began his career with the Vanguard Group of Investment Companies, a pioneer in the mutual fund industry, which has since grown
to be the second largest mutual fund company in the world. His client during this time was First Boston Asset Management group based in New York City through which he managed the accounting services for the closed ended mutual fund holdings totaling over $40 million.

After moving to Nashville in 1991 to attend the Owen Graduate School at Vanderbilt University, Mr. Phillips founded the Owen Business Projects Group (OBPG), a consulting firm staffed with students designed to provide Nashville entrepreneurs with services and students with valuable experience and income. While he was President of OBPG, over 40 students were employed by Nashville-based entrepreneurial companies.

Subsequently, Mr. Phillips moved into a small business consulting firm of Whitney Johns & Company. In this role, he provided advice to entrepreneurs on business valuation, business acquisitions, bank financings, and obtaining other hybrid securities. Mr. Phillips was aggressively promoted until being named President at 29 years of age. 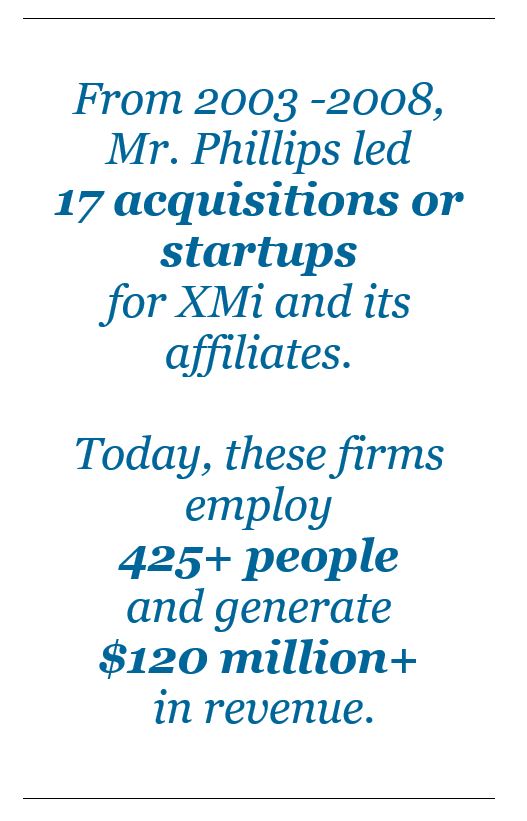 During that time, he was instrumental in raising capital for and founding Capital Across America, LP (CXA). CXA was a Tennessee-based SBA-licensed Small Business Investment Company with limited partners that included Bank One, Bank of America, Wachovia, and a number of individual Tennessee investors, including Mike Shmerling. Mr. Phillips role was to consult with portfolio companies on corporate finance strategies.

From there, he moved into a corporate development role for XMi. At the time, XMi had six employees and needed to materially increase scale. Starting in April 2003 and continuing over the next five years, Mr. Phillips proceeded to lead 17 acquisitions or startups for XMi and its affiliates. Today, these firms employ approximately 425 people, and generate over $120 million in revenue. This track record embodies transformational growth.

During that time, he also took on increasingly greater responsibility with XMi including being promoted to Chief Financial Officer and today manages much of the company’s day-to-day affairs.

Notably, going back to 1991 with the founding of OBPG, Mr. Phillips has worked to support, counsel, grow and transition entrepreneurial businesses. Through this experience he has developed a reputation for identifying great talent to lead small businesses, and the collection of these skills will help make the difference in generating outsized returns for the state.

Mr. Phillips serves or has served on a number of business and community boards, including the following:

Mr. Phillips holds a Master’s of Business Administration from Vanderbilt University and a bachelor’s in Management and Psychology from Saint Joseph’s University in Philadelphia.

David Belitz currently serves as the Chief Executive Officer of The Lupton Company, LLC. The Lupton Company is a family office established from the sale of the Lupton family’s Coca-Cola Bottling Companies. The office has been managing the family’s investments and other affairs since the mid-
1980’s. Mr. Belitz joined the Company in 1997 and served as the controller and CFO before being appointed as the CEO in January 2012.

His responsibilities at The Lupton Company include or have included:
• Development, implementation and monitoring of an accounting an controls system
• Development, implementation and continued monitoring of an investment performance analysis system that covers domestic stocks, international stocks, bonds, real estate, private equity, venture capital, hedge funds and cash equivalents.
• Negotiation, structuring and management of all banking relationships of The Lupton Company and various family members.
• Oversight, mentoring and business planning for family owned businesses or for businesses sponsored by Lupton family members.
• Trustee of various family trusts including the John T. Lupton Trust.
• Cash flow planning for The Lupton Company and all of the Lupton family members.
• Management of various Real Estate holdings of the Lupton family.

In addition to the responsibilities listed above Mr. Belitz has served in a number of capacities for entities in which the Lupton family has invested. For example, Mr. Belitz served in the following capacities:
• Advisor to the CEO and Board of Directors of a golf club and apparel manufacturer located in Tennessee.
• Arranged financing and served as an advisor to a medical device company.
• Arranged financing and provided business plan development assistance to an internet auction services company based in Tennessee.
• Served as the Vice President and Chief Financial Officer of a utility services company. In this role he managed a restructuring of the company and managed the company through the technology development phase and ultimately served as the principal negotiator during the sale of the company to Landis+Gyr.
• Member of the Board of Directors and interim Chief Financial Officer of an industrial wireless company. In this role he actively participates in the development of the business strategy, cash flow planning, technology development schedule and as principal negotiator of customer contracts with international offices in Georgia and Romania.

David Belitz serves on the Board of Advisors of InnovateHere, a program of the Lyndhurst Foundation which is focused on attractive innovative high growth businesses to the downtown Chattanooga area. He is also a founding general partner of the Chattanooga Renaissance Funds (I and II), a series of angel funds investing in seed and early stage businesses in Chattanooga and the surrounding regional area.